Since we are unable to post on a regular basis, we thought we'd cannibalize our prior work. So for now, we offer Stockton & Tweed classic:

After an exhaustive study, the Bush Administration has determined that there is little or no terrorist violence in Iraq, just defective automobiles.

In a press release, the Administration noted that the car bombings, once thought to be the work of terrorists are, in fact, the result of defective automobiles.

"It's a bit of a relief," said Scott McClellan, White House Press Secretary. "We knew this Iraq thing was going to work but the violence was such a surprise. Now we know better. It's defective cars. They're exploding all over Iraq."

"It certainly makes me feel better," said L. Paul Bremer, former Gauleiter of Iraq. "I thought I had messed up. I thought we needed more ground troops. We just needed more personal injury attorneys. Most of these cars are probably manufactured in France."

With this revealation, the pressure now mounts on Iraq's infant civil law system. The question is: Can the new courts handle the massive products liability claims sure to be filed in the next few months?

"I have no idea," says Ramhal ibn-Ibin, Judical Administrator. "We don't know much about western tort law. Up until now, if someone injured you, your family had the option to confiscate the offending man's daughter or to have the man torn apart by wild dogs. This is all so new for us."

According to automotive design engineers, the most common problem with Iraqi cars is the thickness of the steel surrounding the gas tank. "It's too thin," says Gilbert Hobart, chief designer of GM. "When it gets damaged, say by a bouncing rock or by a bump in the road, it can explode quite easily." Hobart also notes that tons of TNT placed in the vehicles trunk may also cause problems if detonated.

As the number of vehicles in Iraq steadily diminished (from 13.8 million in 2003 to 122 in 2004), Iraqi's are confident the elections will proceed as scheduled.

Due to cut-backs at the prison, the warden has limited our access to the internets. Postings will be sporadic from now until 2008. Luckily, our parole hearings coincide with the start of the Presidential Primary season. 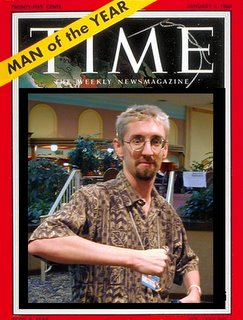 When Harry Flick opened his mailbox two weeks ago to retrieve his copy of Time Magazine he was floored by the news magazine's cover story.

"I couldn't believe it," said Flick, a 38 year-old graduate student. "They didn't even give me a heads-up or anything. Me, Time's Man of the Year!"

Flick was so excited he immediately telephoned his parents. "I forgot about the three-hour time difference though," admitted Flick. "Dad was royally pissed. He said that I wasn't even a man, let alone Time's Man of the Year, because I still don't have a driver's license."

Flick's euphoria quickly faded over the next few hours, however.


"I had a real heart-to-heart with myself," said Flick. "I couldn't help wondering, why me? I mean, I do have some pretty remarkable accomplishments. In college I made the biggest rubber-band ball in the tri-city area. I also have the most extensive library of Charlie's Angel's episodes ever recorded on Beta-Max. That something. Still, I don't know if I'm worthy of it all."

Flick confided that he's not sure the recognition is all it's cracked-up to be. "I sat around all that day expecting phone calls; from the press; from friends and family. No one called."

Flick's friend, Derrick Newsome, a co-recipient, has no such confusion over the award.

"Fuck, yeah," said Newsome. "Harry may not think he deserves it but I sure as hell do."

Newsome credits his blog, "Derrick's Own Blog," as the reason for being named Man of the Year. "It's an awesome blog," said Newsome, who admits he hasn't updated the blog in months. "I developed a system for teaching people Elvish, you know, Tolkien's Elvish from the Lord of the Rings? And not just Sindarin either but both forms of Elvish."

Newsome's biggest thrill was the fact that his self-proclaimed nemesis, author J.K Rowling, hasn't won the coveted award. Newsome has devoted hundreds of hours e-mailing the Harry Potter author, pointing out various inconsistencies in her works, especially in the field of apparition.

"J.K. - fucking - Rowling hasn't won yet," noted Newsome, "even though she may be single-handedly responsible for getting an entire generation of children interested in reading. All those kids, waiting in line at midnight to by her stinking books....fuck her!"

Recent reports of the pregnancy of Vice President Vlad "The Impaler" Cheney's lesbian daughter Mary ignited a firestorm of controversy among conservatives. But recent reports and statements by the Cheney's seem to be cooling tempers.

"No science was involved with this conception," said Heather Poe, Mary Cheney's companion. "We prayed a lot - so did the Vice President, and we thank him for that." The Cheney's also deny that any spermatozoa was terminated in the impregnation of their daughter.

While the words of Heather Poe calmed the tempers of some, the Vice President addressed another rumor - that Mary's pregnancy was a new form of terrorist activity.

Said a stoic Vice President Cheney, "we are investigating the circumstances of this event - it's unusual, it's not what you would expect. I have asked both the NSA and the FBI to investigate, and we have been assured by the NSA that no WMDs are suspected of being anywhere near my daughter."

International 'chatter' spiked just prior to the conception.

While exactly how Mary Cheney conceived a child is still a mystery, many in the Christian community believe they have the answer. "It's Christmas, her name is Mary, and she's the daughter of one of God's warriors - this is clearly the second coming," said Joseph Alsop of The Christian Union National Trust.

Others are skeptical. Concerned Woman for America President Beverly Lahaye has called the pregnancy "unconscionable." Says Lahaye, "Such a conception was not in any of my husband Tim's Left Behind books. I think Mary Cheney used the seed of a man. It might be Steve Forbes. Or possibly Jean Kirkpatrick."

Timothy Lahaye is the best-selling author of the Left Behind series of books, a staple in the Armageddon Out of Here genre of Christo-Lit.

As we enter the Christmas/Holiday season, let us pause and give thanks to all the people that have come before us, making this season possible.

Many times we forget the sacrifices made by others. Let us never forget those that have given their lives to protect Christmas, be they elf, reindeer or sales clerks 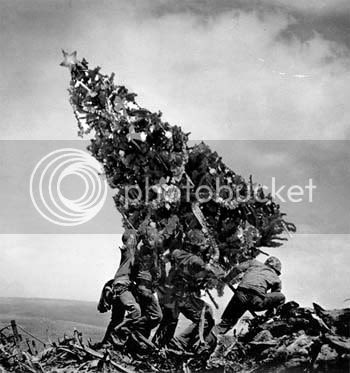 The 2006 mid-term elections have rocked and shocked the nation's fundamentalist movement. Not only did the Democratic Party defeat many of the rights allies in Congress, three statewide initiatives also spelled defeat for the nation's righteous.

In Missouri, voters voted in favor of stem-cell research;

In Arizona, voters defeated a Marriage Amendment that would ban same-sex marriages.

"Last Tuesday was disastrous," said Ken Waitling, a fundamentalist minister and one of the leaders of the nation's religious conservatives. "It is comparable to 1932, when the National Socialist Party took the Reichstag."

Waitling has warned his parishioners that they will now have to be on guard and protect their families. He suggests building underground shelters not unlike those built in the 1950's during the height of the Cold War.

Others, however, seek to learn from the election and modify their positions.

Fundamentalist Minister Howard Malveson has decided to re-evaluate certain positions, including the hard line taken on stem-cell research. "I think it's time we accept that science does have some role in medicine and medical issues. A small one, true. But a role nonetheless."

The Bush administration responded to the GOP's trouncing at the polls on November 7, 2006:

"We think that the Democratic Party is in its death throws," said Vice President Dick Cheney, noting that Trent Lott was easily re-elected in Mississippi.

Secretary of Defense Rumsfeld was more circumspect, noting that the defeat of the insurgent democrats promised to be a "long, hard slog."

Ken Melman, Chairman on of the GOP and one of the architects of Bush's re-election in 2004 claimed that the democrats' recent successes were an indication that the Republican's were winning. "They are lashing out, and are under pressure. If we weren't so successful, if we weren't taking the fight to them. . . of course we'd have fewer casualties."

White House spokesman Tony Snow attempted to back-peddle on some of the White House's earlier predictions about the election results. "We never said. . . the President never predicted that the Republican party would retain control of the House and Senate - he never said that."

Some conservative pundits have even suggested that Tuesday's results were part of a "flypaper" strategy. "Democrats are now flocking to Congress," said one conservative. "Now we'll know where they are and hopefully, more will be drawn to DC. We'd rather fight them here than...or fight them at home....Am I in the right room?"

Letters to the Editor